Idaho Shakespeare Festival’s version of the “The Two Gentlemen of Verona,” goes a little musical 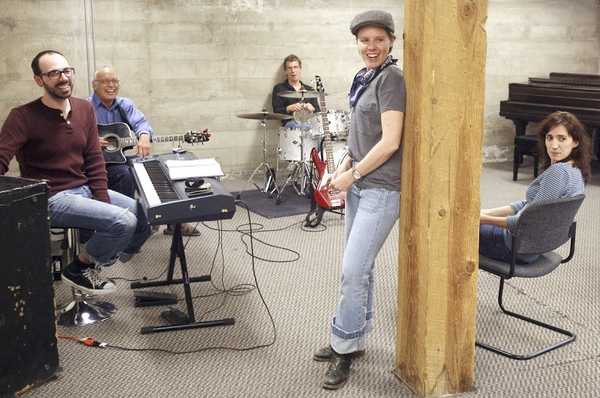 When Sara M. Bruner first heard director Charlie Fee’s idea of performing live music for his new production of “The Two Gentlemen of Verona,” she panicked.

But creativity and collaboration soon took over, as Bruner and music director Matthew Webb began pulling songs together and placing them in the scenes.

“So far, it’s been a blast. We’re like a real kickback Greek chorus,” Bruner says.

As a director, Fee is a master of manipulating music to help tell his story and offer a new context. He did that artfully in his Beatles-infused “A Midsummer Night’s Dream” and his 2000 production of “Two Gents.”

But here he wanted to do something different, he says.

“Why not just perform the songs live? Turns out it’s so much better,” Fee says. “It just opens up this whole new possibility.”

Through a mix of songs by Regina Spektor, Ingrid Michaelson and Nick Drake, the musicians create a bridge between the play’s characters and the world around them.

As singers, they comment on the action, like a Greek chorus, but because it’s music, they also can subtly — and often slyly — highlight and underscore the intention of a particular scene.

They also are company actors, so they easily step into smaller roles in the play, those who act as guides and advisers for the main characters.

“Two Gents” is one of Shakespeare’s early comedies. In it, two bosom buddies, Proteus (Dakotah Brown) and Valentine (Neil Brookshire), find their friendship challenged when Proteus falls in love with Valentine’s girl, Silvia (Nika Ericson). When Proteus’ girlfriend Julia (Lee Stark) suspects something is up, she disguises herself as a boy to discover the truth.

Through Julia’s riotous and heartbreaking journey into the world of men, we meet some of Shakespeare’s funniest characters, Speed (M.A. Taylor) and Launce (David Anthony Smith).

The live music performance gives this very funny play a little more heart, Bruner says. There are moments when the singers become involved in the action, in one scene serenading Silvia as Proteus seeks to woo her.

It’s like producing a play and a musical at the same time. It works because classical text is already musical, says Dominick, who comes from the world of musical theater. Her first role at ISF was the Baker’s Wife in “Into the Woods” in 2008.

“In the text, you find your peaks and your operative words, just like you do in musicals,” she says. “If you let yourself live in the moment, the worlds blended very easily. It was organic the way we would find a song that would heighten the scene or tell what’s to come.”

In Boise, they will put their act on the outdoor stage, and add longtime company member Marker, who is very much a troubadour, Bruner says.

She recalls touring with Marker in the educational outreach program Shakespearience.

“We’d do the Shakespearean play in whatever little Idaho town we were in, then Stitch would sit in the big truck we used and just play guitar all the time,” she says. “He’s a total musician when he’s not onstage.”

Webb knows the music; Bruner knows the play. She played Julia in Fee’s 2000 production of “Two Gents,” and is the production assistant director. As Webb selected songs, Bruner figured out where they would go.