Is it real or is it Peter John Still?

“Boom!” A loud clap of thunder ripples through the Idaho Shakespeare Festival amphitheater on a hot summer night. As the sound slowly rumbles away, it leaves a vibration in your chest. You look up and then around. Clear skies, then — “Boom!’

You tighten your collar and reach for a hat or plastic bag. Rain is a hazard of outdoor theater, except this isn’t real thunder. It’s a Peter John Still sound cue.

Call it the “Peter Effect,” a phenomenon that the resident ISF sound designer has been pulling off for 20 years at the festival’s various locations. [0x0b]

You can’t tell a Peter Still thunder crash from a real one, says the festival’s producing artistic director, Charlie Fee.

“I can’t tell you how many times that’s happened,” he says.

It’s bound to repeat this summer when ISF opens its 35th season the first weekend in June. This year, you’ll hear Still’s sounds in “The Two Gentlemen of Verona” in June and “The 39 Steps,” a Hitchcockian farce, in September.

Still is the mad professor of the Idaho Shakespeare Festival who approaches a play with a penchant for cultural research.

“Peter brings a huge knowledge and perspective — and sometimes a truly crazy sensibility — of global music and theatrical traditions,” Fee says. “That has been enormously helpful to me and anyone who is willing to work with him, that allows us to go in directions I don’t think we would achieve without him.”

Still came to ISF in 1992 as part of director Bartlett Sher’s creative team for “Richard III.” Still started working with Fee the following year, fell in love with Boise and stayed. 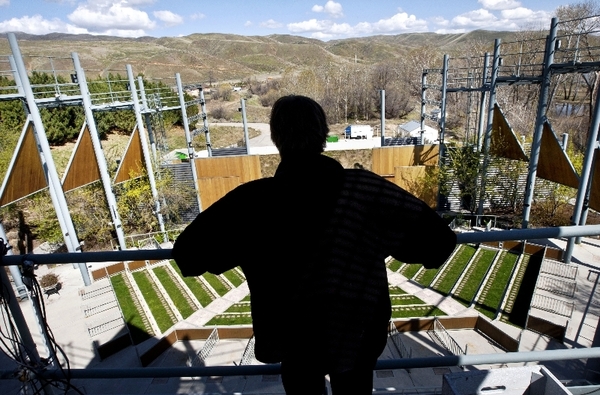 Still grew up in the lush English Midlands. He studied music at Oxford’s New College, training in early music choral traditions. He learned about theater by working in it — in storefront theaters in San Diego, repertory houses in London, regional theater in the U.S., on Broadway and in Boise.

He settled in Boise in the late 1990s and took his citizenship oath at the U.S. Federal Building, “looking at the Boise Foothills,” he says with a smile.

Still works at ISF, its sister company — Great Lakes Theater Festival in Cleveland — and Boise Contemporary Theater. He also helps Sher create work at the Metropolitan Opera, such as this season’s “Le Comte Ory,” and on Broadway with Sher’s 2006 Tony-winning revival of “Awake and Sing.”

THE MAGIC OF SOUND

Over the years Still’s sounds have elicited coyote howls from the surrounding hills, incorporated the actual birds in the amphitheater into the soundscape and created stirring moments on the ISF stage.

Last season’s ghost story “The Woman in Black,” a show that is in essence about imaginative theatricality, was the perfect sound feast for Still. He packed it full of thunder, wind, horse hooves on gravel, London street sounds, trains, screams and one magic squeak.

Actor Chad Hoeppner sat on a chair next to a picture frame, which became the window and seat on a train. As the train pulled into the station, he used his sleeve to rub the nonexistent glass. Hoeppner’s move came with the perfect “squeak, squeak, squeak” of a shammy rubbing on glass. (Actually it was the squeak of an antique spyglass.) And bam — in that instant the glass was there. That’s what sound adds to the art of theater, Still says.

“If you take a bad idea and keep working it, you’ll end up with something amazing, because no one else would have done it,” Still says. “That’s the truth of how it (theater) works. The way we’re brought up thinking doesn’t teach you that.”

Not all ISF directors will work with him. His shows are technically dense and difficult to run, Fee says with an exasperated sigh. One sequence can have more than 70 sound cues, which the production stage manager must call through the headsets.

“It boggles the mind how complex they are, and there is no simplifying for him. He can’t do it,” Fee says. “It’s so frustrating, and yet — is the play better? Probably. It seems like it when I’m working with people who aren’t Peter. They’re easier to call, but they’re not better somehow.”

ENTER AT YOUR OWN RISK

Still’s small cave-like basement room has been his home away from home since the building opened as a theater 11 years ago. (The ISF offices are in the Boise Contemporary Theater’s building.)

The office is lined with shelves that are stuffed full of plays, books on bird sounds and theater aesthetics, binders full of cues from past shows, bits of wire, electricians’ tools, blocks of wood, the bass drum used by the Sgt. Pepper mechanicals in “A Midsummer Night’s Dream,” working and broken guitars, bells, whistles and a jumble of other things that make interesting sounds.

He spends more time in his office on his computers and 1980s vintage Soundcraft mixer than he does in his apartment.

It’s easy to forget he’s there, says Hannah Read, marketing director of ISF and a costume designer for BCT.

“There have been many late nights when we’re working and it’s midnight, and suddenly there’s Peter emerging from his basement,” Read says. “And oddly it’s usually at a time when we need something done.”

Still likes to stay behind the scenes. He tried acting once in a stage-crew send up of a Christmas panto (a traditional British holiday comedy). At the end of the run, the backstage crew puts on a parody.

“I had three small roles in one of them, which is enough to understand that walking out in front of 550 people is pretty much the same stress level as a minor car wreck,” Still says. “That’s a standard piece of knowledge that any theater person can tell you. An actor really has no skill, except themselves. They either like you or you fail. It’s very different.”

He wears backstage crew-wear — T-shirts and Levi’s 501 jeans (cut-offs in the summer) — every day, even when he’s not at the theater. He rides his bicycle year-round, seriously practices aikido and is known for esoteric dinner parties where he prepares 18th- and 19th-century recipes such as elk en croute and pheasant with mustard cream sauce.

“The more Shakespeare you do, the more you’re taken out of your own culture, and the more you learn about theater,” Still says. “More people are getting into the mystical side of things; it’s really not that obscure. The thing about my interest in Shinto is it really is the closest thing to pre-Reformation, slightly pagan Catholicism, the thing that Shakespeare and his family, and milieu were nostalgic for. It wasn’t Catholicism as we think about it. This was also about going off and dancing in the woods and in the churchyard.”

WHAT YOU DON’T HEAR

OK, this is where it gets spooky. Besides the audible cues, Still employs subliminal sound in his designs. So there always is sound going on, though some of it is below human perception (but not a coyote’s). Still is convinced subliminal sound changes the dynamics on stage.

“I’m trying to make scenes work from the get-go from moment to moment. If you feel a lack sometimes it only takes a subliminal sound to fill the absence and make if feel right.”

It’s an idea Still came up with working at ISF’s ParkCenter location where street noise was constant. In 1993’s “Julius Caesar,” he added a low-level gunshot that you couldn’t hear on stage, but “I felt on edge,” Still remembers. “It created a mood.”

“We (humans) are very sensitive,” Still says. “Different sounds activate different parts of the brain. You can stimulate emotions on stage.”

Your nonconscious mind processes subliminal input. That’s where you feel things before you intellectually understand them.

“It works with evolution and instinct. So does telling a story. That’s why you come out of play feeling whole, because your mind has been filled two different ways,” Still says.

There really is something to it, says BCT artistic director Matthew Cameron Clark.

“I’ve seen it work on stage and from the audience,” he says. “There was a subliminal dog cue in ‘Zoo Story.’ Jerry, my character, is making reference to a dog growling. The sound was coming from a speaker mounted under the floor. It really gave me something.”

Still does some of his best sound work at Boise Contemporary Theater, where he has complete control, and a stage manager, Kristy Martin, who doesn’t mind calling hundreds of cues she can’t hear.

“There’s no question that the quality of the work being put on stage is higher because of Peter being here,” Clark says. “He’s this extreme on both ends of the spectrum. The attention to detail and this impressive scientific approach to things, then he always leaves a door open for something to be totally by chance.”

That makes it stand out.

Dana Oland is a former professional dancer and member of Actors Equity who writes about performing and visual arts for the Idaho Statesman. She also writes about food, wine, pets, jazz and other aspects of the good life in Boise. Read more arts coverage in her blog at Voices.IdahoStatesman.com/oland.