When the lights came down on Idaho Shakespeare Festival’s production of “Cabaret” Saturday, the audience sat in stunned silence, as if trying to recover its breath after a punch to the stomach. Then the lights went up, and it erupted into applause as the cast returned for their well-deserved bows.

Director Victoria Bussert’s production of Sam Mendes’ gritty adaptation of “Cabaret” took the audience on an emotional ride from a giddy opening to a devastating end.

That’s the power of musical theater. It can distill complex themes — from anti-Semitism to economic devastation — dress them up in lacy costumes and communicate the social underpinnings that led to World War II, all through the song and dance of a talented cast. 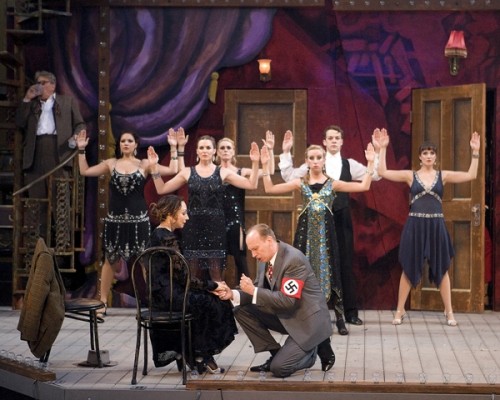 Most people know “Cabaret” from Bob Fosse’s glossy film that starred Liza Minnelli and Joel Grey in career-defining roles as Sally Bowles and the Master of Ceremonies. The 1998 revival offers a seamier, more sinister take on the Kander and Ebb musical. This show has mature themes and is appropriate for kids 14 and older.

The tone is underscored by Jeff Herrmann’s perfectly dingy set that speaks to the seediness of the cabaret and deterioration of Fraulein Schneider’s boardinghouse. He puts three doors at the back that are ironically reminiscent of the screwball comedies of the 1930s. Charlotte Yetman’s costumes are equally multidimensional. Musical director Matthew Webb keeps the band lively.

Though Bussert and choreographer Gregory Daniels give a nod to Fosse, they stay true to Mendes’ stripped-down, edgy take. The show has a slick center but is appropriately rough around the edges.

“Cabaret” is set in the Weimar Republic Germany of 1933, where a decadent, creative culture flourished, and many turned a blind eye to the Nazis’ rise to power.

We’re dropped into the Kit Kat Klub, which becomes the central thread that ties the show together.

Cliff, an American writer eager to explore his bisexuality, and Sally, an English cabaret singer trying to sleep her way to the top, meet. They begin as roommates-with-benefits and end as doomed lovers.

The cabaret numbers offer biting commentary on the reality scenes.

Placer owns the show. He attacks the Master of Ceremonies role with aggressive sexuality and wit and is close to brilliant in his ad libs with the audience.

Like Placer, Dominick is a triple threat who sings, dances and creates a complete character. When it comes to the finale number “Cabaret,” she delivers it like a curse rather than an anthem.

Pale, fevered, barely able to stand, she spits out the words. The production allows her to be true to the character rather than offer an expected Minnelli-esque slickness.

As good as the individual performers are, the show is greater than its parts. This “Cabaret” is a grown-up musical for the company, meaning that as a company, ISF is coming into its own abilities to produce visceral, engaging and tightly wound musical theater.