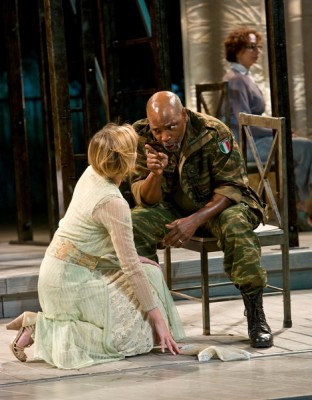 Director Risa Brainin and her company uncover something more human, base and instinctual on which the tragedy turns. They point the finger at the doubt, fear, racism and unbridled ambition that feed the green-eyed monster.

Focusing on the emotional underpinnings of jealousy reveals each character’s fatal flaw. For Othello it is doubt; for Iago, ambition; and for Desdemona, her flirtation with danger.

Brainin, as is her habit, sets her “Othello” in a 21st century world. Guards are Secret Service agents, and soldiers wear the timeless modern military uniforms that are so familiar from CNN. The play opens with Iago, in a fevered state as he watches Cassio’s promotion play out over and over as if on the 24-hour news channel of his imagination. It haunts him and drives him to action.

David Anthony Smith gives a remarkable performance as the charmingly evil Iago. It’s a role he’s been hungry to play for some time now, and he feasts on it.

Iago is the most likable villain in Shakespeare’s universe, and Smith plays him with devilish charm. He oozes charisma and ironic humor while offering us a glimpse of a stewing, liquid evil that has probably always bubbled below the surface. Iago has suppressed his contempt for Othello over the years because it served his ambition to do so.

But this play is about the turning of the tide.  Read more