They Came, They Sat, They Loved: 30 Years of Shakespeare in Idaho

If it were up to me, With our Good Will: 30 Years of Shakespeare in Idaho would be required reading not only in Idaho schools, but schools all over the world. Doug Copsey’s look back at the formation of the Idaho Shakespeare Festival, from their 1977 beginnings on the steps of the One Capitol Center in downtown Boise, to its current home in one of the most beautiful outdoor amphitheaters in the world, is a book for anyone with even the slightest interest in business, history and the triumph of human determination. Even if you’ve never so much as glanced at a Shakespeare play, this book will inspire and enlighten you in ways that you can never imagine. 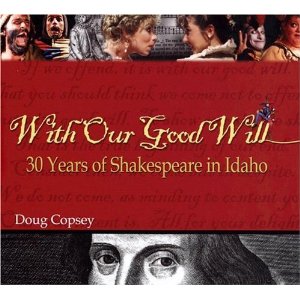 Published in 2006, With our Good Will offers a rare, first-hand look at how the Idaho Shakespeare Festival came into being. Designed to look like the big book of family memoirs that it essentially is, its pages are brimming with everything from snap shots of original letters, budget records and invoices, to photographs and drawings that are works of art in their own right. The text is rare because the story told within is straight from the source. It’s not often that movers and shakers like Doug Copsey have the ability to sit still long enough to put pen to paper, but, as readers will come to see, the author’s gift for storytelling is as keen as his talent for acting, directing, producing and organizing successful enterprises.

The story of the Festival begins just after Copsey’s return to Boise in 1976 after nearly a decade away. After cutting his teeth in Helen Farrer’s drama department at Boise High School in the mid-1960’s, Copsey went on to obtain his undergraduate degree in Theater Arts from the University of Nevada, Reno, in 1968. After further training in film and video production, Copsey returned home to Boise and picked up his first acting gig as guest artist in a Boise State production of One Flew Over the Cuckoo’s Nest. The actor was inspired by the pool of talent he encountered at the University, but he was equally disheartened knowing that these artists would eventually need to leave Boise if they wanted to make a living at their craft. At that time, the only outlet in town was the well-established but all-volunteer Boise Little Theater (founded in 1948), and Copsey thought it was time to create a professional company.

“Look down and think Greek” was the fateful suggestion to developer Arthur “Skip” Oppenheimer, as he and Copsey gazed out of Skip’s 8th floor office of the then brand-new One Capitol Center. What Boiseans see now as the outdoor dining area of Angell’s Bar & Grill on the corner of 9th & Main, Copsey saw as a spectacular outdoor amphitheater, just begging to come to life. “The blank, concrete whiteness,” he mused, “cried out for the color of sets and costumes, the movement and action of actors, dancers and musicians.” Copsey thought that surely the designers had this in mind when building this natural amphitheater.

The developers were not aware of any such plan, but the idea of bringing outdoor theater to the downtown area – and more folks to the center – was certainly something worth considering. The newly opened Main Street Bistro, Boise’s first full-scale restaurant, occupied the ground floor and could have used a shot of adrenaline itself. Recognizing this opportunity, as well as an opportunity to support the arts, the Oppenheimers opened their space (and their checkbooks) to Copsey and his crew to see what they could do. With a total budget of $4500.00 ($1000.00 of Copsey’s own money and a $3500.00 loan from Doug Oppenheimer), the wide-eyed cast and crew embarked on the seemingly impossible task of transforming One Capitol Center into a verdant, functional and convincing outdoor theater and at the same time persuading people to come. The show to run at “The First Annual Main Street Bistro Summer Theatre Festival” in 1977 may have been A Midsummer Night’s Dream, but, at times, it played out more like a comedy of errors.

Several members of the original core group were fellow Cuckoo’s Nest cast members, and the rest were friends and enthusiasts that could be “cajoled into chasing a wild and crazy dream.” In the months leading up to opening night, actors worked as stagehands, directors as costume designers, and rehearsal space was shared with the likes of horses and Cocker Spaniels. City officials were pushed to the limit as were the budget and the occasional temper, but on opening night, all signs of struggle were ushered off stage, and in their place appeared all the sights, sounds and magic of A Midsummer Night’s Dream. Over 350 people came that night, and, by the time the run closed on August 6th over 3500 people had come to share in this “crazy” dream. After the bills were paid and creditors made whole, each member walked away with $225.00 for his or her eight weeks of hard work.

Success had come in surprising and welcome measure to the men and women of the budding Festival, but the struggle was far from over. By the following year, the coffers were once again empty, and Main Street Bistro had closed its doors. Indoor rehearsal space remained elusive, and it seemed that just about all that survived the winter was some salvaged lumber and a few sturdily stitched costumes. But, the spirit of the crew remained, and while the summer of ’78 season would take some doing, they had a few things going for them. The Oppenheimers allowed use of the amphitheater for another year, and Ray’s Oasis – the successors to the Bistro – were as supportive as could be. This year, however, the fledgling company was financially on its own. There were no loans to count on, and a source of significant funds from the previous year was snuffed out. A large portion of the seed money from their first season came from selling advertising space on the surrounding fence, but the city had put a stop to that, citing violations regarding the placement of billboards within the city. But, true to form, the players worked their way around this deficit by printing up the company’s first program, and an affectionate community snatched up the advertising space in no time flat. Despite a series of potential disasters including destructive winds, oppressive heat and a disappearing Duke of Milan, The Two Gentleman of Verona drew more than 4500 audience members and garnered much-deserved attention from the local media.

By 1980, this scrappy group of talented individuals that seemed to come from nowhere was very much on its way to becoming the world-class institution that we see today. By the end of that fourth summer, they had expanded their seasons by offering multiple shows and longer runs, formed a patron committee, executed well-organized marketing and public relations efforts, held their first public fundraiser and incorporated officially as a non-profit under the name of the Idaho Shakespeare Festival. Attendance was topping 11,000, and the entire community seemed to embrace this cultural phenomenon. But, to say at this point that they lived happily ever after would very much be remiss. Growth and expansion also meant increased cost and debt, and with the pace at which members had been working over the years, fatigue understandably began to set in. 1980 was also the year that they needed to leave One Capitol Center and begin a 17-year search for a permanent home. Ray’s Oasis was moving out and Angell’s Bar & Grill – with plans of their own for that fabulous outdoor space – was moving in.

I’ll leave the rest of the story for you to discover in With our Good Will. It will lead you on a wild ride through their three years at the Plantation Golf Course and the fourteen years next to Ore Ida on Park Center Boulevard. It will introduce you to the entire cast of producers, directors, actors, officials and philanthropists – as well as some memorable guest appearances from wandering ducks, buzzing mud wasps and a pair of amorous Llamas. It will lead you, finally, to the special place they now call home – The Idaho Shakespeare Festival Amphitheater and Reserve at 5657 Warm Springs Avenue – a place that seems to have always attracted magic. A place that Native Americans called “Peace Valley” and early Boise settlers called the “moonshine capital of the world.” A place where each winter, the noble bald eagle comes to roost and where over 200 species of wildlife live in harmony with the cottonwood trees and the Boise River. It is, perhaps, as it was best said by board member Norena Gutierrez, a place where “people find themselves again, in the stories Shakespeare tells, and truths of time are always acknowledged…”

Doug Copsey is still moving and shaking. He continues to write for area publications and over the last three years has helped form the Idaho Writers Guild – an arm of The Cabin (a literary center for Idaho located in Julia Davis Park) – and is head of that group’s Governing Committee. His connection to the Shakespeare Festival continues as both an ardent fan, and as a member of the Advisory Committee, and he wants folks to know that he continues to be “humbled and amazed by the support this community continues to give to what has become one of Idaho’s artistic jewels.”

I owe a hearty thanks to the Festival’s Directing Manager, Mark Hofflund, for his patience with my tedious questions, and for his service to the Festival for almost twenty years.

With out Good Will is available at most booksellers as well as at the concession stand at the Festival. The author will be hosting several pre-show book-signings this season and for this schedule – or for more information on the Idaho Shakespeare Festival Including educational programs, tours and the upcoming season – please visit: www.idahoshakespeare.org or call 208.429.9908.

See you under the stars!
Click to read original article online